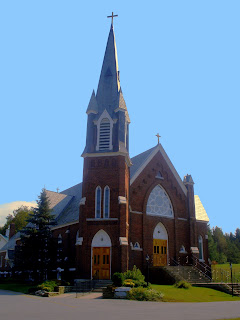 With Easter on the horizon, I find my thoughts turning to my deceased mom, more and more. Part of that, no doubt, is because holidays are inherently linked with family, even those who are no longer, physically, with us. The other reason, just as compelling, is that death and resurrection are inexorably linked to Easter. Naturally, the specificity of ’s death and resurrection give rise to general thoughts of death and the question of life-after-death.

When I was young, between the ages of four and seven, I lived in , , where both my parents attended —my dad, completing his Ph.D. in Biochemistry; my mom, finishing her undergrad and then a Master’s in American Studies. Despite Purdue being in the heart of ’s conservative “Heartland,” counterculture thrived at that time, during the late 1960s. My parents were not immune to the influences of that movement; so, to a certain extent, I was immersed in it as well, even though I may not have really had awareness as such. It wasn’t till much later, when I better understood the reality of the Vietnam War, that I made the connection of my parents leaving us with babysitters, to go off and protest at anti-War demonstrations.

All my years were “war years.” While the Vietnam War had raged thousands of miles away, I spent many an afternoon playing army on a common lawn, with my brothers and the kids, from the same graduate-apartment quad as ours. Little did we realize, then, that actual, flesh-and-blood people were being maimed and killed, amid smoldering ash from torched, jungle villages. Back home, in our oasis of white-bread , my brothers and I coped as best we could with the “injustice” of being the only kids not allowed to own toy guns. Our unsympathetic parents seemed oblivious to the embarrassment we felt at having to rely solely on our thumbs and index fingers. Yet, somehow, in spite of our deficiency, imagined or otherwise, we held our own in the heat of battle; the neighborhood kids died just as readily from our “hand” guns as from any of the store-bought models. Under an afternoon’s warming sun, we took our turns, falling dead—spread-eagle on the ground for thirty seconds—before miraculously resurrecting ourselves and rejoining the game.

Too bad real war can’t work like that. Too bad adults can’t tap into early-childhood innocence and take a peek through that window of ignorance, through which we once were privy to observe life—during that time in our lives before we even knew of death, let alone of its universality and permanence. We certainly didn’t expend time marveling at—or even questioning the feasibility of—our immortality; forget about our fully grasping the miracle of resurrected life and how the claim of its one-time occurrence impacts all of humankind, forevermore, whether you believe in it or not.

My mom lived roughly half her sixty-one years as a practicing Roman Catholic and half as an agnostic with atheistic leanings. Despite her personal spiritual journey, she celebrated Easter every year, without fail—many of them with me, both when I was a child and an adult with my own, two children. Given the fact my parents left the Catholic Church when I was five, it’s fair to say my mom spent more Easters with me as a non-believer than as a believer. (I had rejoined the Catholic Church, making both my First Holy Communion and Confirmation, during my freshman year of college.)

Nonetheless, Easter was always a special time for us. My earliest Easter memory is from when I was four or five, because I can remember going to Easter Mass with the family—my two, older brothers, included—at the church on Purdue’s campus.

I donned my fancy Easter dress with a yellow coat and matching hat, all of which were bought just for that special occasion. I also wore a pair of white bobby socks, each with a small, embroidered flower on its lacy ruffles. Completing my outfit was a pair of black, patent-leather shoes and a matching purse. Seemingly, for this one occasion, even I—a proclaimed “tom-boy”—didn’t mind how feminine I must’ve looked. For once, I savored not looking exactly like my brothers, in my often-worn hand-me-down clothes of theirs; instead, at least on that particular morning, I relished looking more like a mini-version of my mom.

Still, despite the clarity of these recollections, my memories, in general, are fleeting. I can remember walking from our car to the church, my hand, secure within my mom’s. That Easter exuded freshness, everywhere—its air, laden with springtime’s renewal-of-life sounds and scents, as the mid-morning sun rays pierced around the edges of Purdue’s tall, brick buildings. An image of the church’s interior is pretty vague; although, it’s a safe bet to say it was huge and contemporary. I remember sitting way in the back, on the left-hand side, seated next to my middle brother. (We were inseparable, back then. Even with his being two years older than me, we were roughly the same size and often mistaken for twins.)

I remember straining to see past the wall of bodies, just to get a glimpse of the front alter; and, so, I have no real memory of the priest, readings, or homily. There was a folk-music group, consisting of hippie-like characters, playing songs, like “, Row the Boat Ashore” and “Kum-Bi-Yah.” I remember the singers standing, on the right side of the alter area, I believe, next to a wall of stained-glass windows; at least, the image I have in my mind is of them with sunlight streaming through the window panes, casting a golden glow behind them.

Yes, memory is fickle. I can’t explain why some memories resurrect themselves, while others shy away from the light. I’m just glad that, on occasion, they feel inclined to work their way to the fore—especially when they’re of my mom.